Many amputees continue experiencing a sensation like if their limb that was removed is still there. This becomes problematic when the sensation is a pain.

Mark sent me this article about a young woman that had part of her leg amputated because doctors could not resolve the pain she had: https://www.nytimes.com/2019/03/03/sports/morgan-stickney-swimming-amputee.html?action=click&module=Editors%20Picks&pgtype=Homepage

This New York Times article shows you everything that is wrong with our "modern" culture including the medicine. An injury is treated through the surgery which often creates more destruction and subsequently causes more pain and suffering which is then treated with suppression which escalates bodies toxicity and more analgesics are used until the body is so drugged that it cannot function and the pain cannot be suppressed any longer. The final medical act is the removal of the organ that is damaged in the hope of resolving the problem of pain.

In this particular case, the pain is gone after the surgery but in most cases when the limb was removed due to the pain, the pain continued to affect the patient as if the problematic limb was still there.

Modern medicine has no clue because it is based on faulty science which makes it impossible to understand what is going on.

To simplify things and make them easier to understand we have to dip into the field of quantum mechanics again.

From the quantum standpoint, our body is an energy field expressed in a variety of frequencies. Every cell, every tissue, and every organ is just energy vibrating in specific frequency which creates the sacred geometry. This sacred geometry is deciphered by our brain and it is projected out according to the brain's programming to represent this frequency in a matter state as an object, an organ, element...

I have explained many times that what we experience as our physical reality is just a brains interpretation of our expectation.

What happens when our foot or leg is removed? Our brain expects it not to be there so in our physical reality we do not see it as a part of our body but the energy created sacred geometry is still intact.

When the limb is removed it is like making an electromagnetic copy of this limb and moving it aside but the original electromagnetic imprint remains intact as the part of your energetic vibrational structure.

Since your brain manifests according to its expectation and you are expecting not to see this limb as the part of your body, now you do not see it but in fact, on the quantum level, your body is intact and kicking.

A Russian scientist Dr. Kirlian created a special technique to photograph a field of energy. The corrupt and controlled publicly recognized "scientists" are debunking Kirlian's technology through nonsensical trivial explanations so do not pay attention t this.

Here is a Kirlian's photograph of a leaf that was torn apart: 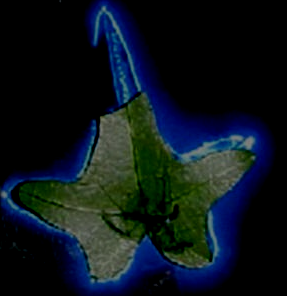 As you can see, the energetic imprints of the missing parts of the leaf are remaining.

What is interesting is the fact that the body can regrow the missing part. It can do it because the energetic structure is remaining so only the brain has to be convinced that the missing part is still there.

This is hard to do because the brain can only manifest what it believes is the reality. The easiest way to convince the brain is through some convincing information like for example watching the salamander regrowing its missing limb. If you can convince your brain that your body can do the same, you can regrow your limb as well.

When I was young I remember reading about one child in Turkey who spent his days playing with salamanders and when he lost his leg in an accident, his leg regrew completely. His brain was accustomed to seeing the limbs being regrown on the salamander so it had no problem manifesting the same on its own body. Many such things have happened and are suppressed from the public knowledge as a part of the misinformation process. Many doctors have witnessed the fingertips of children being regrown together with the missing bone after being severed, but this is being ignored by "science".

In this following article you can read about some exploration in the field of limb regeneration: https://www.quora.com/How-likely-is-science-to-regenerate-amputated-body-parts-in-the-near-future As you can see, the regeneration of body parts is not only possible, it is probable.

Instead of awarding the people involved in researching the possibilities of body regeneration, this science is being suppressed. The full attention is given to a surgeon that is amputating limbs with a new technique and new types of the prosthesis being developed.

The reason for this is that the research into the ability of the body to regenerate itself would eliminate the transplant industry, but more so, it would awake the scientists to a completely new way of understanding the human body. The final result would be a spiritual awakening which is the mortal enemy of Luciferian religion which is trying to keep humanity asleep.

Not to be too long and boring, I will end this article here and in the following blog I will continue elaborating on pain and why did this young woman have pain in her foot that could not be stopped by her doctors which ended with an amputation. What a nonsensical loss of a leg caused by the health experts we are told to trust.